The 214th Glasgow Company of the Boys Brigade was formed in March 1924 by the session and congregation of the Whiteinch United Free Church, Dumbarton Road, Whiteinch, Glasgow. (Later to become Gordon Park Parish Church) 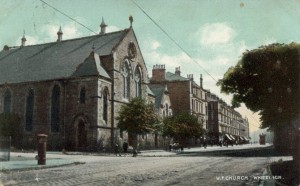 Although the church had been for years a powerful force in the community, it had no uniformed organisations. There was a boys club, started a few years previously by George Mathieson, which led to the formation of the new “Company”. George himself becoming the very first Captain of the company.

At that time, Whiteinch District of the Glasgow Battalion was a thriving group of older companies whose range of activities were as many as they were varied. Despite, and perhaps because of this competition, it was not long before the 214 was taking it’s place with the best of them.

When the founder Captain then moved away to Greenock to continue his BB work, he left the Company as a sturdy infant growing stronger every year.

For the officers, in the first year of the 214, to even consider the formation of a Pipe Band was an act of confidence and of faith in the future. Fund raising was always a problem, but this difficulty was gradually overcome and new equipment was obtained, and the famous “214 Pipe Band” was born.

The decision has proved to have been so right. Many, many boys have passed through the Company and the band, while comporting themselves with honour and with credit, particularly within Pipe Band circles to the present day.

The 214 flourished through the years and a more detailed history of it’s achievements are always on going and are added to this site as and when possible.

With congregations diminishing (as were most churches in Glasgow), Gordon Park Church closed it’s doors and amalgamated with Jordanvale Parish Church to form Whiteinch Parish Church.

The 214 managed to continue until the company merged with the 135th Company from Scotstoun in 1986, at a time when societies youth were finding too many other things to keep them occupied in a modern world. Battling on in spirit, though not through their number (As the Company took the 135th’s name), 214 training in the form of pipe band instruction still manages to survive to this day.

The 214th GCBB Ex Members Association continues to operate even though the Company no longer exists, with Ex Members throughout the world still passing on their knowledge as active BB officers, Instructors and Band players within the pipe band community.