(As the Scotland V England World Cup Qualifier 2018 approaches, it has prompted me to type up some memories about the 214 playing at Hampden Park over the years.)

For many a band player in the 214, playing at Hampden Park for the first time was always a memory they’ll never forget.

Arriving at the small door to the right of the main stand towers, you were ushered up a narrow staircase into a small locker room /gym, where wooden lockers lined one wall and the opposite one had windows, with ledges about 5 feet up the wall, that you struggled to see out of as a young bandsman. In the corner were rubber gym mats, piled high along with the dreaded medicine ball. Many an unsuspecting boy would be skelped with this before Alex MacIver, Joe King or Dan Finlay arrived in the room. This was where pipe cases, drum covers /boxes & jackets were stored and we were able to tune up prior to going onto the track and kept the noisy band away from dignitaries and the rest of the SFA bigwigs. 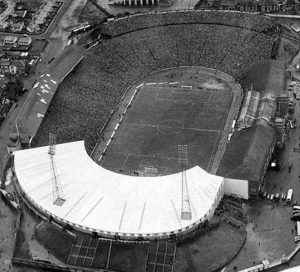 Hampden Park was built in the early 1900s to provide the then top-club Queens Park with a larger home. It officially opened on the 31st of October 1903 with a match between Queens Park and Celtic (1-0).

The stadium was bowl-shaped, with one covered main stand and vast terraces on all other sides. It then counted as the largest in the world and broke several attendance records.

Hampden Park opened a new North Stand in 1937, and in the same year recorded its highest attendance when 149,415 fans came to see an international between Scotland and England (3-1).

The official capacity of the stadium at that time amounted to 183,724, however this was limited to about 150,000 for actual matches.

In 1976, Hampden Park would host another European Cup final, this time between FC Bayern and Saint-Étienne (1-0); however by then the stadium had already severely aged and lacked the facilities of many modern arenas of the time.

By the 1980s, capacity had fallen to below 80,000, and serious questions were raised whether Hampden Park had a viable future. It was finally decided to extensively redevelop the stadium, which meant almost completely rebuilding.

Works started in 1991 and were finally completed in 1999. The 114th Scottish Cup Final of that year was the first match played at the new all-seater stadium. Rangers v Celtic (1-0)

Hampden Park also serves as the Scottish national stadium, hosting all of Scotland’s home games, and is furthermore the annual venue of the Scottish Cup final.

Donnie MacIver was instrumental in getting the 214 band playing at Hampden, as he was well established in Scottish Schools football and hence the SFA connection.

Donnie showed us this model of the “New Hampden” after we had played at a Glasgow v Bradford School’s game in the late 1970’s.

(It took a further 20 years before work was completed!)

These were the main games the 214 played at on our own, though as Massed bands we played at Scotland games too.

Many a supporter in the Stand tried (some succeeded), in the game of “Hit the Bass Drum with a Scotch pie!”

Usually the missiles landed short of the band, but there are a few instances where “Scotland’s main football culinary experience” hit pipers and drummers square in the face. Nothing was funnier than seeing the greasy remnants running down the face of the unlucky recipient. 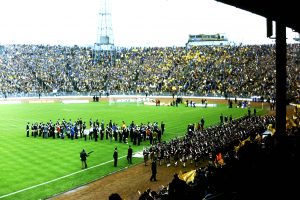 This was the British Championships – Home International that Scotland won 2-1, and would be remembered for the Kenny Dalglish goal when the ball went through the goalkeepers legs (Ray Clemence). 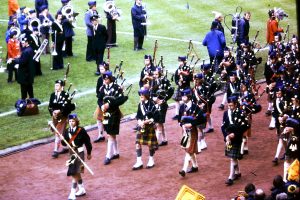 A closer view showing the 214 band in the far rank.

John MacLennan can also be seen in the front rank 5th from the left wearing glasses. 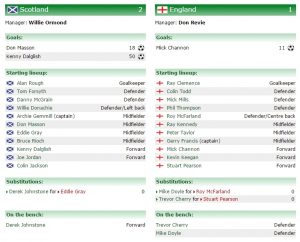 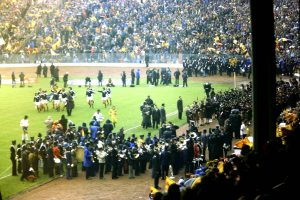 Some of the match day Programme 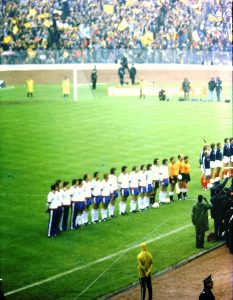 For those of you who don’t remember the game may want to watch this clip. 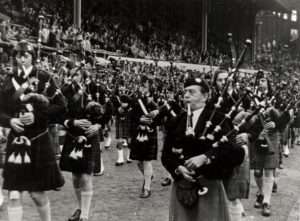 What other football grounds did the 214 play at?

(I know we played at Ibrox for the Centenary in 1983 & the Edinburgh competitions were held in Meadowbank Stadium.)