Joe Noble one of our Ex Members who as an RSPBA judge was recently over judging the New Zealand National Championships.

Joe sent me a couple of emails, (which I have made into a News item) and I would like to share with you all.

The New Zealand Championship ran over two days (11th and 12th March 2016). These were held in Feilding, which is outside Palmerston North in the southern part of the
North Island.  (Click here to read about Feilding)

Part of the contest involves a Street March with all the bands participating, and all the judges standing at regular intervals along the parade route.  Thankfully, I was judging their playing and not their marching.  A winner is chosen from each of the Grades.

As for the main Contest itself, the winner of Grade One was Canterbury
Caledonian Society – their fifth win in a row since 2012. Followed by New Zealand Police and Manawatu.

They all performed to a high standard and I was particularly pleased to again see that New Zealand has a vibrant Juvenile grade, which was won by St Andrews College Christchurch.  I was judging Ensemble on both days.

(This was also Canterbury’s 5th consecutive drumming title – winning the Alex Duthart Trophy. I have attached the winning performances below)

While there I met up with Bobby Turner in Auckland and Stewart Gorle in Tauranga. 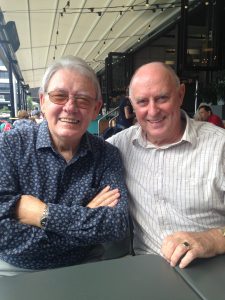 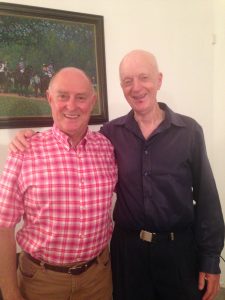 As you can see from the photos they are both reasonably fit and well.

Stewart gave me an old photo which you may already have but, if not, I’ve
scanned it and attached it here. 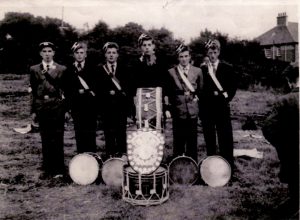 I don’t know where this was taken or what the trophy is, perhaps someone will be able to fill in the gaps?

Thanks for that Joe, good to see that 214 skills are still being put to the test.

(I would like to thank yourself, Stewart Gorle & the others who were at this years reunion who kindly made donations to our funds.)

Well can anyone answer Joe’s question?