I am sorry to have to report that John Rennie passed away peacefully on Wednesday 30th November 2016 at the Queen Elizabeth Hospital.

John had been suffering from cancer for a few years and when I spoke to him last year at the reunion, he thought himself it would be his last one, which turned out to be true.

John was the last serving Captain of the 214BB Company, taking over from Lachlan May in 1984 until the company had no option but to amalgamate with the 135 Company in 1985. 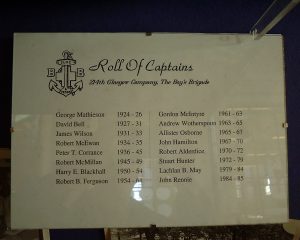 Although not a 214 boy, he knew the importance of the company, being a BB man himself and also a piper.

He was a quiet gentleman, that just got on with it and never made a fuss. 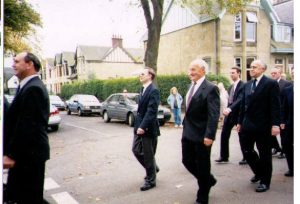 John can be seen on the left of the picture smiling away. (This was at the 70th Anniversary Parade in 1994 at Scotstoun Parish Church.)

Piping played a great part in his life, he played with the Fire Service Pipe Band and latterly with “The Renfrew Pipe Band” (Which still to this day has 214 connections).

His son and daughter both play the pipes and have played with The Fire Service, Lomond and Clyde, Glasgow Skye and his son is currently with The Glasgow City Pipe Band.

John’s cremation is to be held on

I would like to extend our 214 condolences to John’s wife Catherine and the rest of the family at this sad time.