After a mixed day of weather on the Friday and a warmer though blustery Saturday, Grade 1 was competed for by each band having four performances. (One MSR and one Selection on each day).

The moist air on the Friday played its part, (along with no doubt nerves), as I heard three of the bands with early chanter sounds.

Consistency proved to be the key and this years Grade 1 World Champions were Inveraray & District.

I’m sure a lot of us remember being 15 years old and seeing the top bands of the day and thinking how good it would be to play at that level?

That dream came true at the weekend for one of our 214 young boys son. 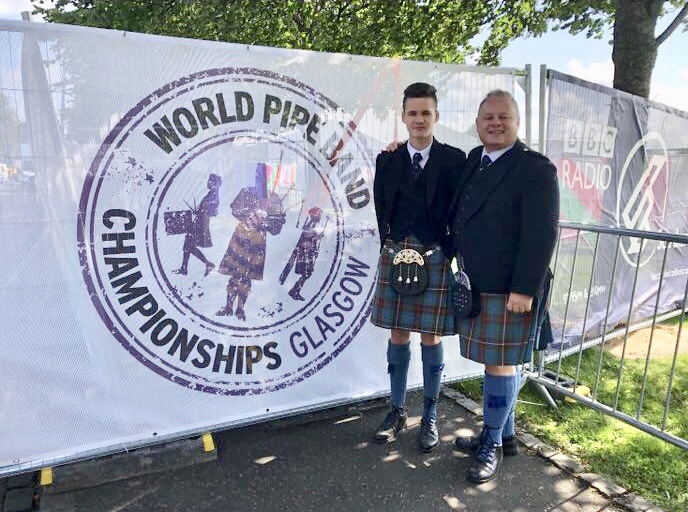 You may remember Kerr playing Alex Connell’s composition of ‘Drum Major George Seymour’, on the side drum at the reunion a couple of years ago along with Donald MacKenzie on pipes.

I spoke to Boghall’s leading drummer Gordon Brown on Saturday evening, he was so happy to see Kerr make it to the big stage at the Grade 1 Worlds.

‘It was great to play alongside him, he is such a composed player for someone so young in his years’.

Well done Kerr, you made your family so proud.

As usual I bumped onto a few 214 faces over the two days, Brian & Stephen McQuillan, Alasdair McKay (who was competing in Grade 2 with Annan), Gordon Medlow was over from Belfast and John MacLeod.

I was also talking to Gordon Rennie the son of the last 214 Captain, John Rennie who sadly passed away a couple of years ago.

Myself, Alasdair, Gordon and John enjoying the sunshine.