We are delighted to advise that we have received a new bespoke bagpipe recording!

Angus Laurie’s composition P.M. Alex MacIver has been recorded for us by Roddy MacLeod, Principal of The National Piping Centre. 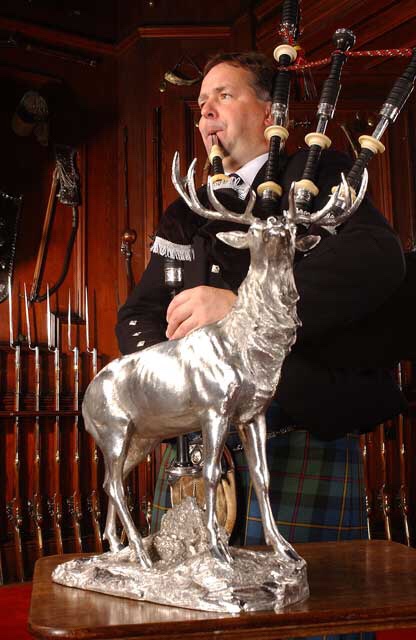 It is apposite that he should favour us with his rendition of the tune.

Like ‘MacKeever’  Roddy was born of island parents, his mother was from Benbecula and his father from Ballalan in Lewis.

Ballalan is the next village, no distance from Laxay where Alex’ father was born.

Roddy fulfilled a role as one of The Lewis and Harris pipers under The Direction of ‘MacKeever’.

When Roddy published the first of what would become countless piping CDs it was Alex MacIver who wrote the sleeve notes.

Without doubt Roddy is a piper beyond celebrity!  When you add to this the fact that Roddy is married to the sister our own member John MacLeod, who was the last  piper recruited by Ian McLellan before he retired from the ‘Polis’ and that Roddy’s wife and her brother John are cousins of the four 214 BB’s McLennan brothers, all in all Roddy is practically one of our own.

For those who would like to know more about Roddy or to learn of his life in piping please check out his interview on Pipers Persuasion or indeed see the articles on The Kyle’s of Scalpay and The Two Alex’s where he is already referenced.

We regularly ask Ex Members to record Alex’ compositions and send them to us?

If you can and are willing, please do so, this allows us to bring the website to life.

(There are plenty of Alex’ compositions still needing sound files.)

You may remember the tune was also recorded by Donald Black on the mouth organ.